So, that brings us to the beginning of the school year! Arlo started second grade a few days before the kindergarteners started, so Felix and I went out for brunch. And then both of our kids were in elementary school--wow! 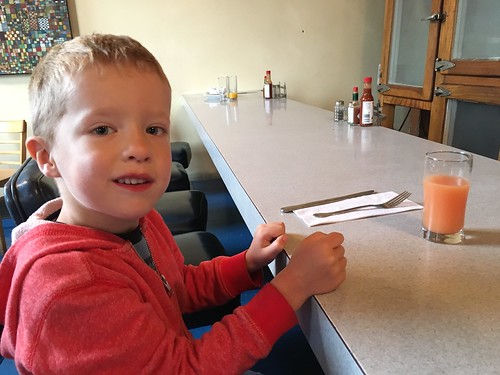 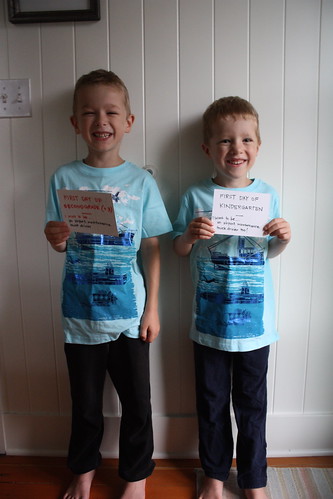 We went out for a celebratory lunch date at Broder--because we could! 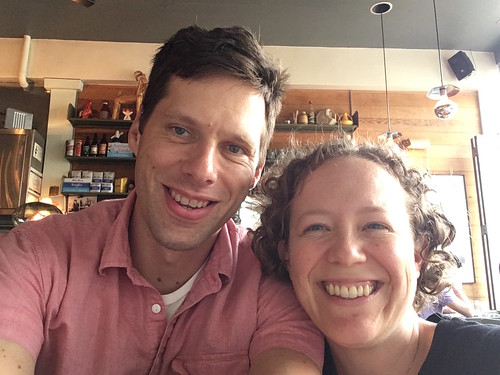 The end of summer and first few weeks of school were smoky because of the fire in the Gorge, but luckily that's behind us now. 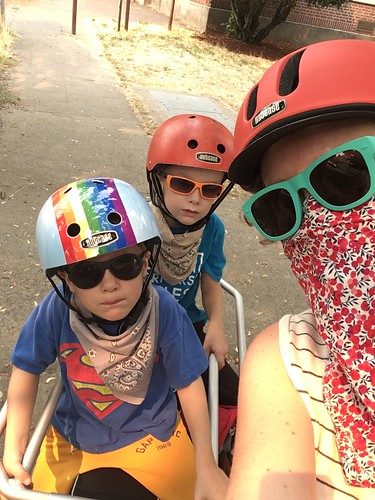 Arlo's class helper, Megan, shared this stealth photo of Felix and Arlo together at recess. They only have a few minutes of overlap outside, but apparently they always seek each other out and hang out together. They fight pretty frequently at home, so seeing this sweet moment at school was wonderful. 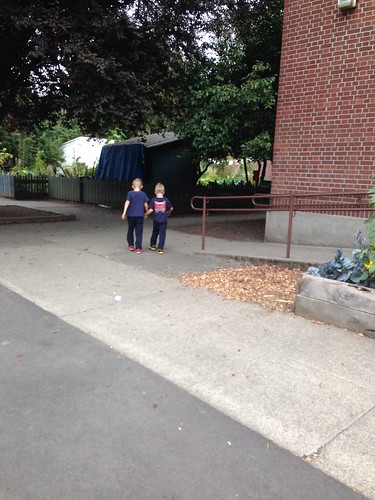 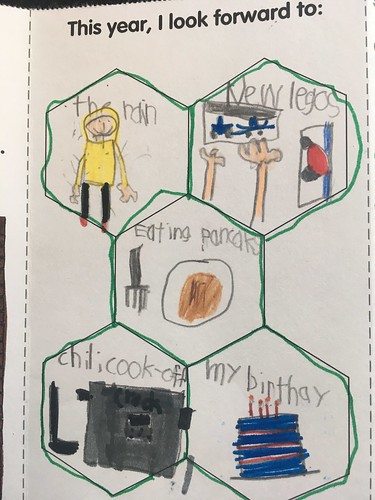 Once again this year, I was in charge of the bike corral at our school's first fundraiser, the Tour de Ladd. It was a beautiful day, and even though I was on my own with the boys (Patrick was traveling for work) and our very early morning started with a flat tire on my cargo bike, we rallied, and things went smoothly. 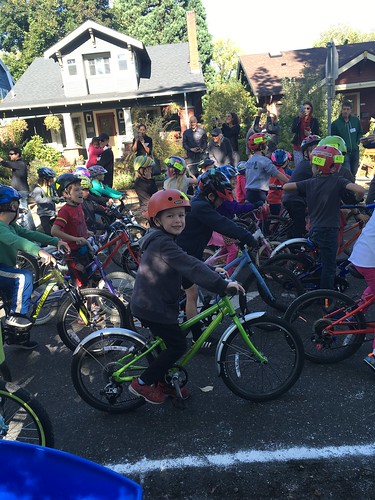 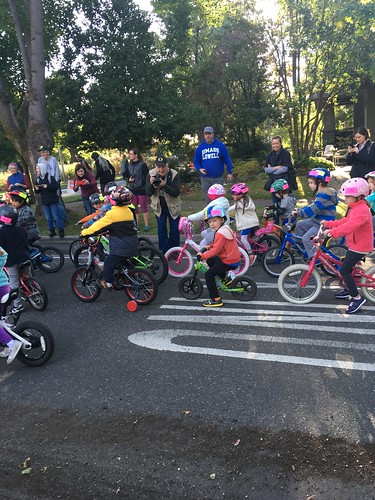 Both boys visited pumpkin patches on school field trips, so our only fall family activity requiring a car this year was going to Kiyokawa Orchards (that was plenty--it's a long drive). 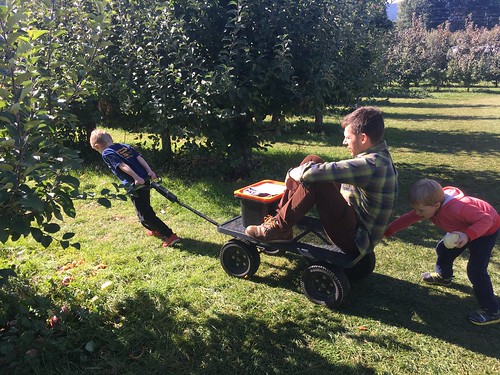 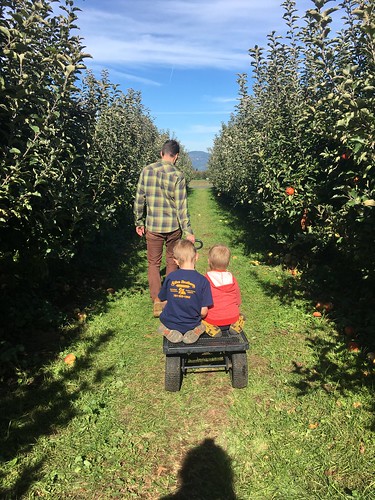 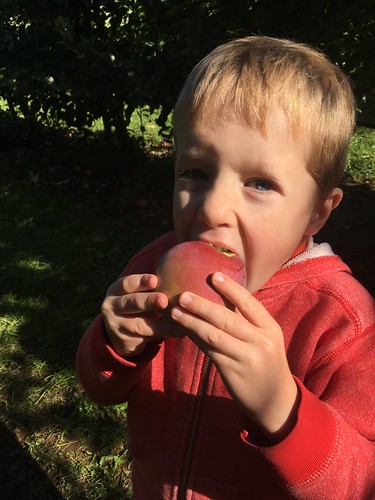 For Halloween this year, Felix was a firefighter (easiest costume ever since we already had the jacket; thank you, Felix!) and Arlo was an airport worker (reflective vest is from IKEA's bike section, lighted flashlight sticks were cobbled together by Patrick). It didn't rain on Halloween, for once! 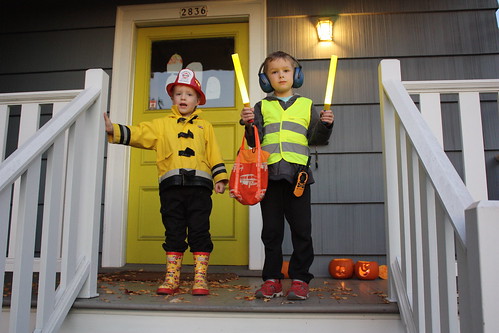 The first and second graders at school had their musical performance last week, and Arlo performed his lines up at the microphone very well. But the best part was that he got to do a little stagehand work (he has wanted to be a stagehand for at least a year, since we started listening to Hamilton). His music teacher let him turn the house lights off and then on for a glowstick number. He was very professional about the whole thing--I was very proud. Teachers are so great! 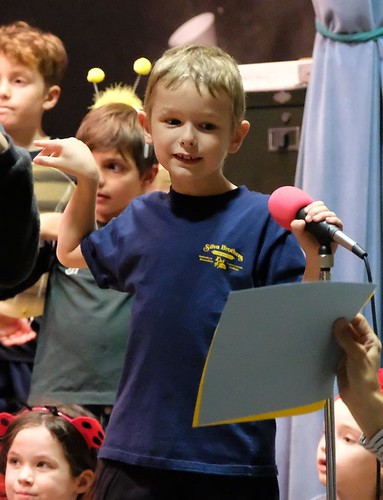 School in general has been going well. I have been volunteering in Felix's classroom once a week, reading with kids, and I'm also helping with six class auction projects (the freedom of having both kids in school went to my head!). I'll write more about those once they're finished.

I want to spend more time in Arlo's classroom. I was there for the class Halloween party, and I've joined him for lunch a few times, but I'd like to be more involved. Arlo likes his second grade teacher, but he stops by his kinder/first grade teacher's classroom every day after school to chat and give her a hug. She's a good egg. Hopefully she'll be Felix's teacher next year too.

Felix had a rough drop-off at kindergarten on the first morning, crying and clinging to me. I burst into tears too after I got out of his classroom. I had expected it to be an easy drop-off, since he was used to the school, but I guess having a new teacher and classmates he didn't know was pretty hard for him. Luckily, he adjusted quickly, and subsequent drop-offs have been fine.

He was having problems keeping his hands to himself for a while. It seemed like when he was frustrated with one of his classmates, instead of telling them so, he would shake them or scratch them or something equally unacceptable. He didn't have problems with this in preschool, so I'm not sure what's going on. For a few weeks there, I kind of dreaded picking him up from school, because I knew I'd hear some new report about his bad behavior that day. Luckily, he has been treating his classmates nicely for the past few weeks, so maybe he's growing out of whatever phase that was. I sure hope so!

Felix loves sitting in front of the stereo and listening to Hamilton, but not the whole thing--just the same 15 seconds of "Guns and Ships" about Lafayette ("America's favorite fighting Frenchman!"). I recently bought him a set of headphones so the rest of us don't have to hear it on repeat. 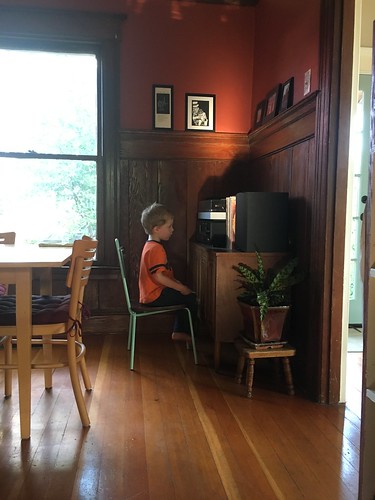 He has recently gotten into the Magic Treehouse books, and we spent a recent day off from school learning a lot about Balto the sled dog and the serum run of 1925 (subsequently, we watched the 1995 movie Balto, which was not historically accurate, thank you very much!). Thanks to Wikipedia, Felix is now of the opinion that Togo and Leonhard Seppala were robbed, and Togo should have gotten the statue in Central Park, not Balto. We also looked at some cool pictures of hero animal taxidermy (combining Arlo's love of hero animals and Felix's interest in dead animals). At first I wasn't very excited about the Magic Treehouse series because of the writing in the first book, but we learned a lot with this one, and I'm excited to read more of them with the kids.

I can't believe Thanksgiving is coming up next week! It'll be time to get out the advent calendar again before we know it...