Our end-of-summer California train trip was similar to our trip last year. We took the train down to San Diego, stopping at Legoland and a few other places, and then we flew home.

I had hoped to catch the eclipse in Portland, since we were near totality here, but no sleeper car rooms were available heading south from Portland on the day after the eclipse, so we ended up leaving Portland on the Coast Starlight the day before the eclipse and catching the eclipse right when we got off the train in San Jose. We had a few pairs of eclipse glasses with us, and even though it wasn't a total eclipse, it was still pretty cool! Maybe in 2024 we can plan farther ahead and experience totality. It sounds pretty amazing!

We spent two days in the Bay Area visiting Grandpa Rick (Patrick's dad) and Sunie. We brought floaties with us this time, so the boys actually got to swim in the pool at Rick's place, instead of just clinging to the edge of the pool for hours. We were able to meet up with my friend (and coworker) Sherri at her house, and I got to see her boys, who were younger than Arlo and Felix when I first met them, and now they're teenagers!

We took the Coast Starlight south from San Jose to San Luis Obispo, then we took the hotel shuttle to the Madonna Inn. We were in the Old Mill room again this year. The water wheel still runs, but it splashed a lot of water on the carpet when we turned it on, so it was a brief entertainment. The pool was a big hit again, and I had brought a swimsuit this year, so I was able to enjoy it too. Again, the floaties let the boys roam the hotel pool freely, and they were sad that we only had an hour or so before we had to get out for dinner. Next year, we might add a second day at the Madonna Inn to really take advantage of the pool. 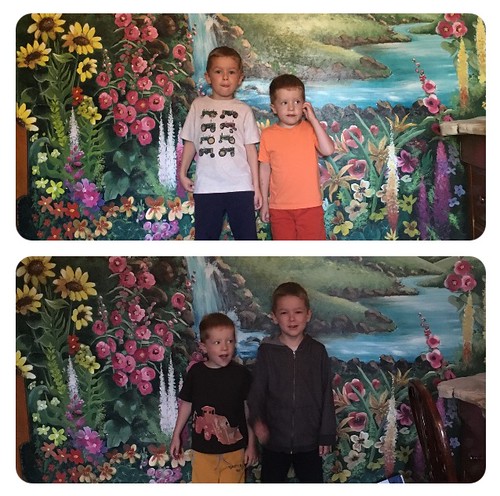 Like last year, my mom met us at the Madonna Inn and had a picnic dinner with the boys in our hotel room while Patrick and I went out to the very pink Gold Rush Steak House. Once again, the food was unremarkable, but I do enjoy the ambiance!

This was our longest travel day. In the morning, we took the shuttle back to the Amtrak station and picked up good sandwiches at Gus's Grocery. First, we took an Amtrak bus from San Luis Obispo to Santa Barbara. Next, we took the Surfliner train from Santa Barbara to Oceanside, which was a five hour ride. The boys stared at screens the whole time (I guess there was a dinner break in there somewhere), and it went well. Finally, we took a Breeze bus from Oceanside to Carlsbad, where we spent the night at West Inn and Suites (they provide a free shuttle to Legoland, and we arrived in time for milk and cookie hour!). Despite the long travel day and late hour, Felix was still chattering away as we approached Carlsbad. These guys were troopers! 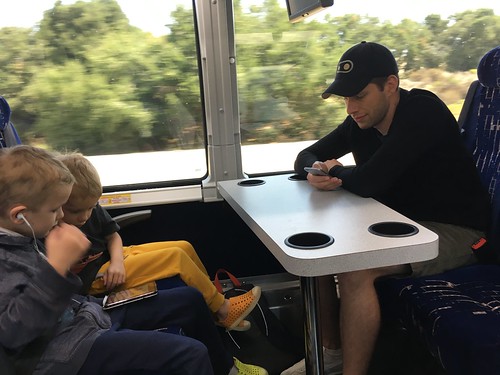 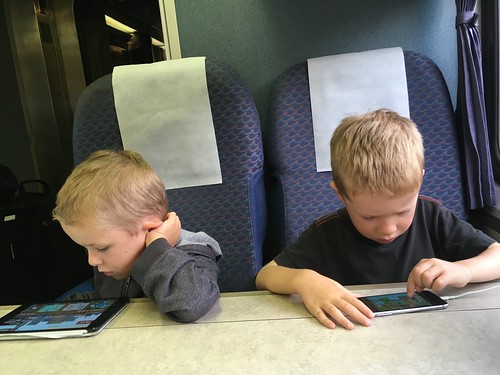 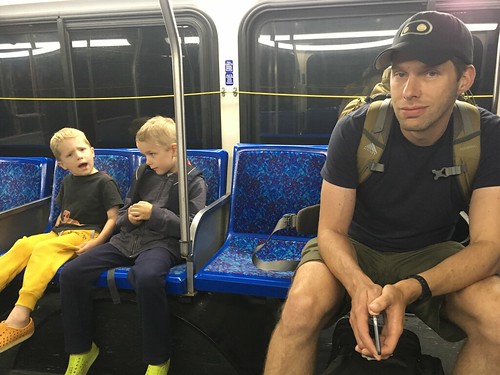 Legoland! We took the hotel shuttle to Legoland right when it opened, spent the day at the park, and then stayed at the Legoland Hotel that night. Last year, the boys spent most of their time in Fun Town, but this year they branched out and tried more rides. 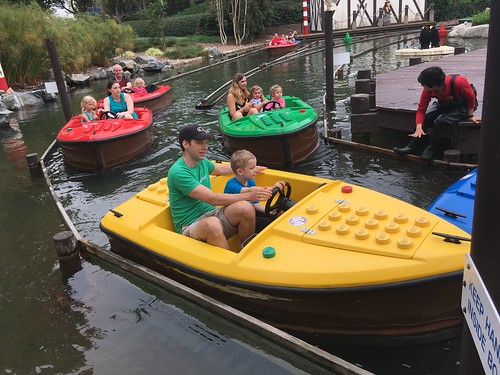 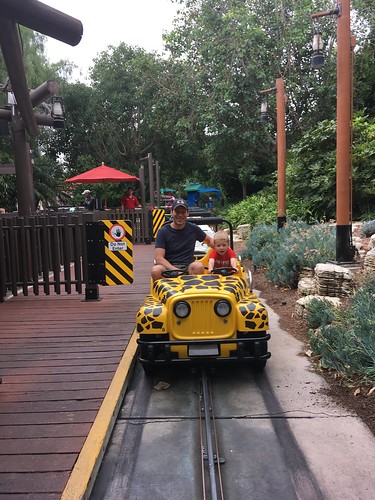 They also spent a lot of time in Miniland, especially Felix. He spent hours staring at the little Lego vehicles driving their loops around the different cities. 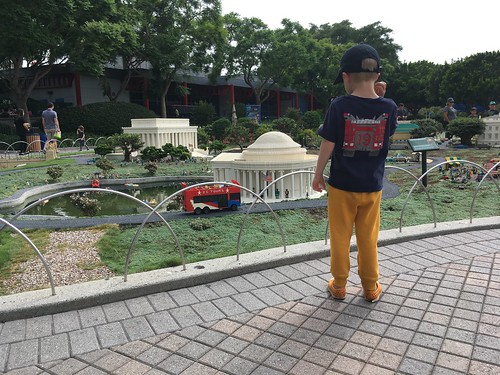 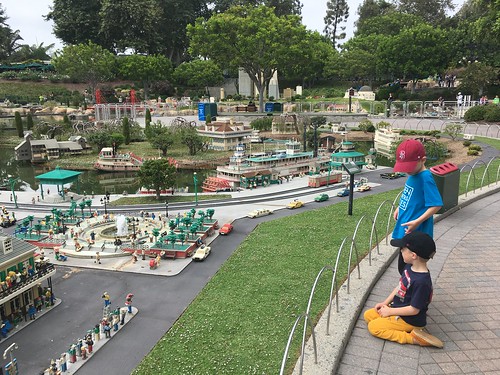 We got room service for dinner, which worked out better than trying to take two tired kids to the hotel restaurant like we did last year. After dinner, Felix was messing with the TV in the kids' area of the room, and he turned on the climactic scene in the last Harry Potter movie and was terrified by Voldemort (and rightly so!). Hopefully that doesn't put them off of Harry Potter. I have been trying to convince them to listen to the first Harry Potter book, but Arlo is staunchly opposed to peril in books or movies. Felix might be into it though.

After a few more hours at Legoland on Saturday morning, we took a Lyft from the Legoland Hotel to Carlsbad Blvd. (a two mile drive), and then we caught the Breeze bus down to Jay and Heather's neighborhood in San Diego. (I wish that there were better transit options connecting Legoland to the Carlsbad bus/train system!).

We had lunch at Poseidon Restaurant near the beach, and then we got a ride from Patrick's brother Jay to the house. (I looked at cargo bike rentals for this leg of the trip, since taking the bus there wasn't an option, but the roads didn't look very bike friendly). Meg and Dan (and Simba the dog!) came down from LA too, and we had a nice time hanging out. The boys got to play video games on a TV for the first time, and they were very much into it. 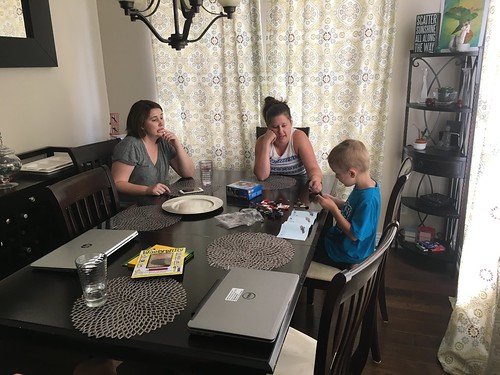 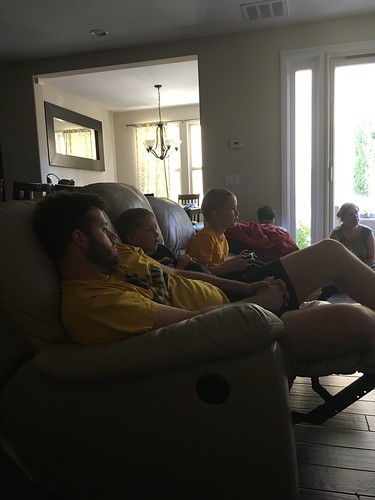 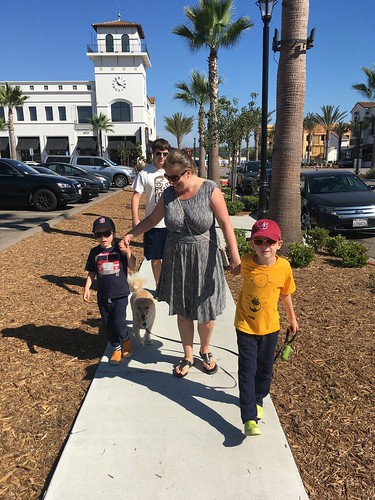 In the morning, we got a ride from Jay to Solana Beach, where we took the Surfliner train into San Diego. We were able to leave our bags at the station, then we caught the ferry to Coronado Island, where we hung out on the beach and had a good lunch near the water at Peohe's. I thought it was a lovely place to spend a few hours, but the boys got bored quickly and spent much of the time grumping about lunch and wanting to play video games. Children! 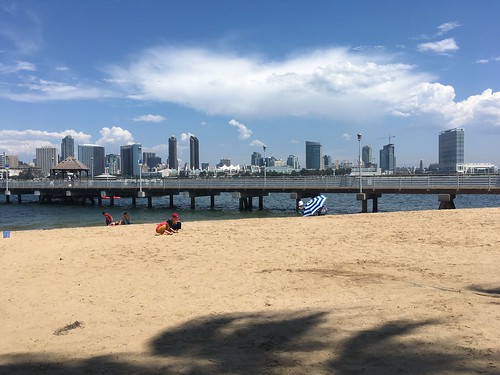 After lunch, we took the ferry back, got our bags from the train station, and took a bus to the airport. Our flight home went well. Like last summer, the MAX was having some issues when we got into Portland, so we had to switch trains a few times, but we got home eventually.

It was a good trip! I'm glad we can go so many places without needing a car.