Every year, Arlo's school has an auction, where each class works on a project to sell to raise funds for the school. I volunteered to help with his class project this year along with another classmate's mom, and we agreed that our project should be a quilt. I'd never made a bed-sized quilt before, but I was excited to work on it. I think it turned out well! 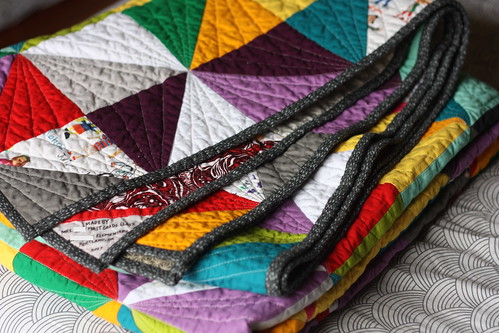 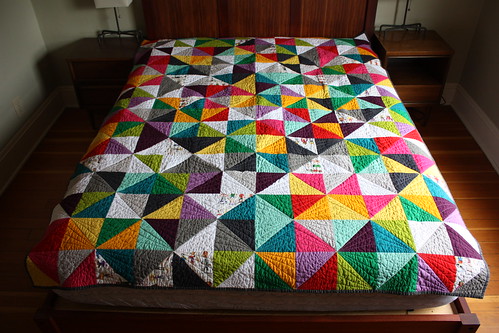 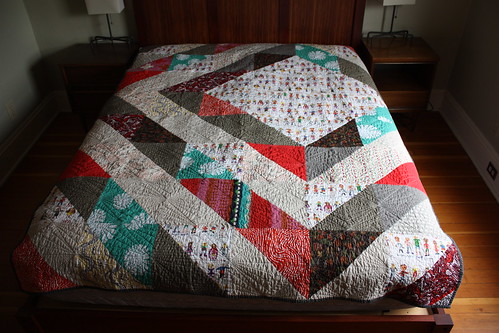 We started in December, brainstorming how the kids could be involved in making the quilt. At my co-planner Beth's suggestion (inspired by this quilt), we had the kids draw self-portraits with marker on paper, then Beth scanned them, arranged them into a repeating fabric design, and had two yards printed on Spoonflower. This worked well, though we had to wait a while to receive the fabric (the default shipping method is slow when shipping to the West coast). 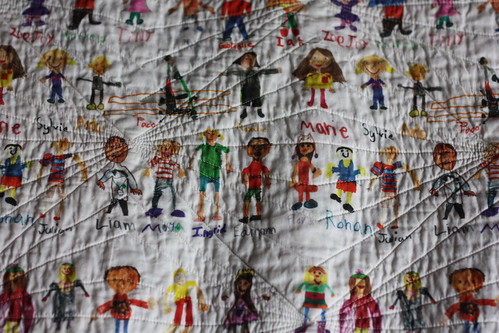 The colorful half-square triangles on the quilt front were inspired by this quilt. The final block size for the front was 5.5", arranged in a 12x16-block grid. For the front, I used 1/2yd each of the portrait fabric and 13 colors of Kona cotton (shown below, plus a medium gray I had in my stash) and 1yd of white Kona cotton. I used the Magic 8 method to make the blocks for the front of the quilt. The back is also made of half-square triangle blocks (11" square) with fabric from our stashes, along with a 22" square of the portrait fabric bordered by eight HST blocks containing the portrait fabric, to make it look like a diamond. 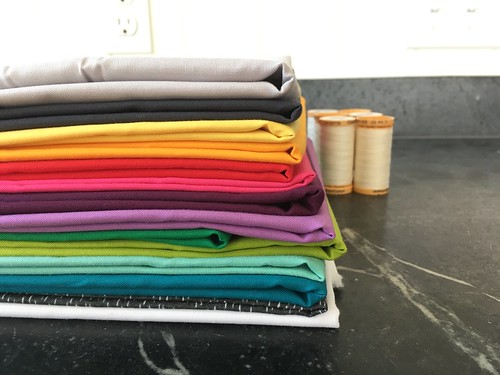 After I'd made the HST blocks, we had the kids pair up, and they each received 16 blocks to arrange in a 4x4 grid. Some of them were excited and spent a long time getting things perfect, and some laid the blocks out in the order they received them and called it good. I rearranged a few to better distribute the colors. 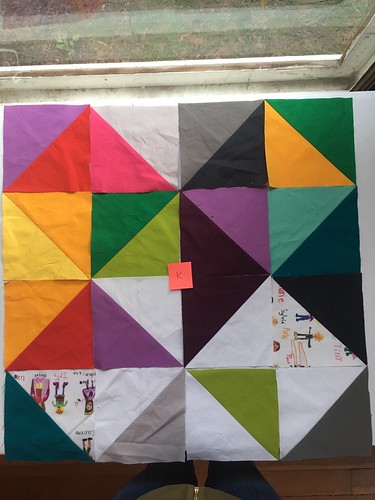 A couple parents helped sew together the blocks for the front of the quilt, I sewed the back, and it was time to quilt it. We had originally planned on having the quilt professionally quilted, but it turned out this would cost $150-$200, which was too expensive for a quilt meant to raise money for the school. So instead I used this as an excuse to buy a computerized sewing machine with a walking foot. I'd been thinking about buying a new sewing machine, and I had some Amazon credit saved up, so I went for it, and I'm really happy with the machine so far!

The diamond quilting pattern was based on this quilt, and I used my bone folder to mark creases for my quilting lines, much like a hera marker is used (yay for multi-purpose book-making equipment!). 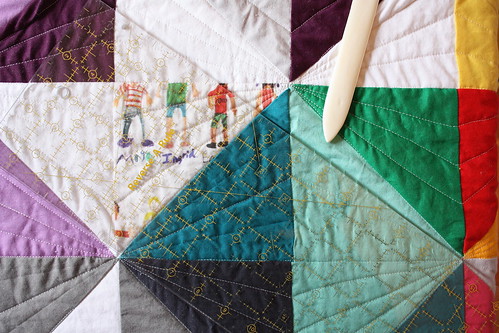 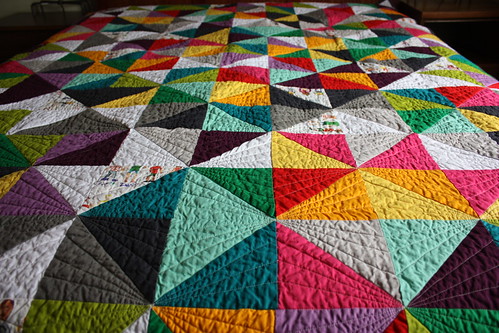 We ended up making the quilt 64"x84", which would fit a twin bed with 15" overhang, a full bed, or a queen bed with no overhang (the bed in the pictures is a queen). After trying out a couple different quilt-as-you-go (QAYG) approaches (see below for more info), I decided to use this approach, which gradually builds the quilt from the left to the right and has nice smooth seams without any sashing required. I did my quilting in four sections (each 4 blocks by 12 blocks), and I didn't have to wrestle too much to get the quilt through the machine. I would use this QAYG approach again when making a bed-sized quilt on my home machine. 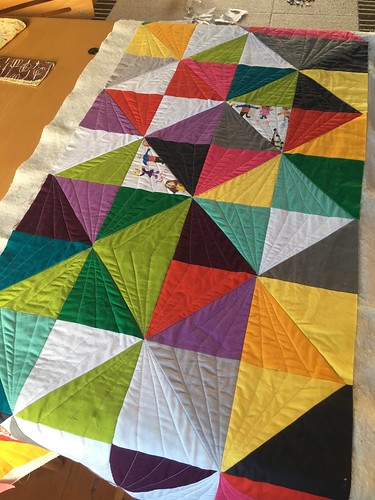 I went against my own best judgement by making the back of the quilt pieced too. It looks cool, but it was harder making everything line up when I was doing the quilting, and if you look closely, some of the triangle points were cut off when I was joining my QAYG sections, since my backing pieces ended up a little smaller than the front pieces after the quilting was done.

When I'd finished quilting, I made the binding and a label. After some Internet research, I decided to use the Pentel Gel Roller for Fabric pen, which I found at my local craft store, Collage. In order to make the letters nicely centered, I first used Powerpoint to lay out the text in a triangle shape and mirror the letters. Then I traced the words onto the matte side of a piece of freezer paper, ironed it to my fabric, held it up to a window, and traced the letters onto the fabric with my pen. I then ironed the reverse side of the fabric for a minute or so (to set the ink, though I'm not sure if this is necessary), attached some binding to the long edge, and sewed the label onto the corner of the quilt as I attached the binding. 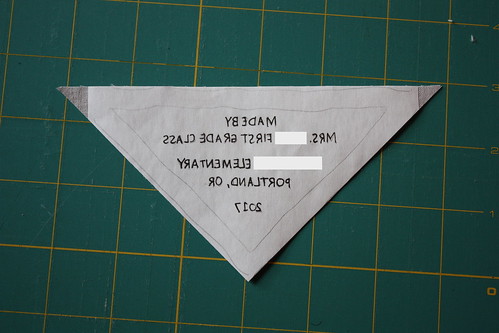 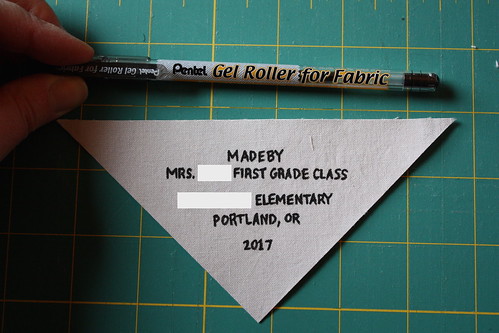 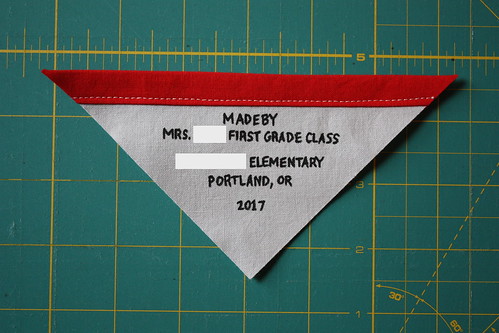 And then I got to do my favorite part of making a quilt: hand-sewing the binding (I use this method). I love sitting on the couch, covered in a cozy quilt, finishing a project slowly and methodically. 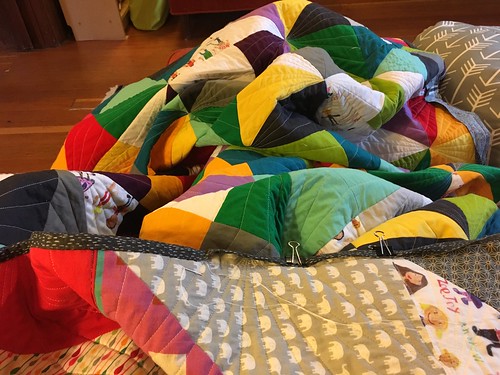 I finished the quilt with just enough time to wash and dry it (the label held up well), take photos of it, and bring it by the classroom so the kids could see the finished product and find themselves on the self-portrait fabric. Then I dropped it off with the auction coordinator and heaved a sigh of relief! 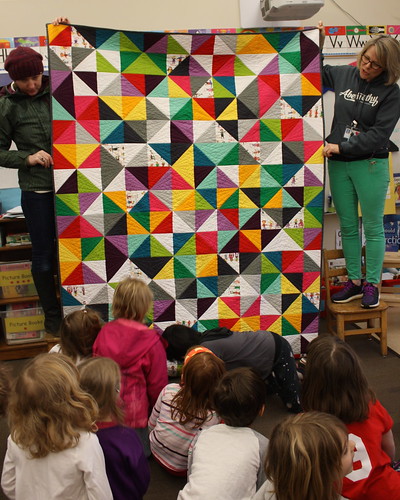 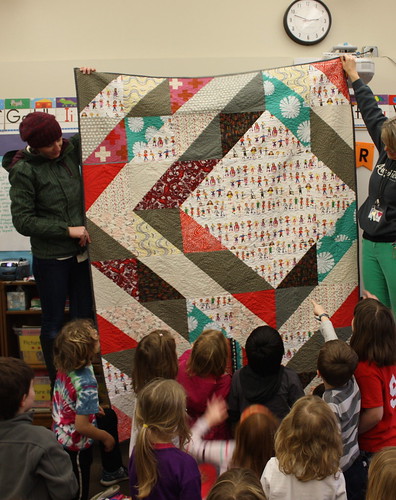 While I was working on the quilt, I was thinking that this was a once-a-year kind of project, but now that it's done, I don't know if I'll wait a full year before making another quilt. Maybe a baby quilt next time though!

Here's a little more on the quilt-as-you-go experiment I did before starting the big quilt: Using stash fabric, I made a 24x36" quilt with six sections, each connected with a different QAYG method. I also used this as an opportunity to try different quilting patterns and some beginner-level free-motion quilting. 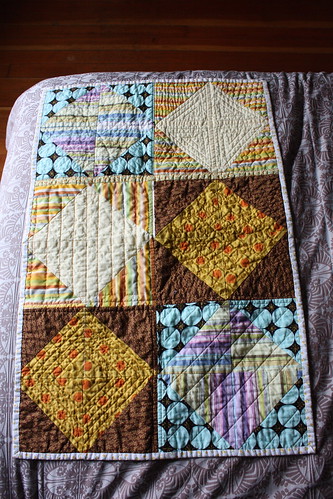 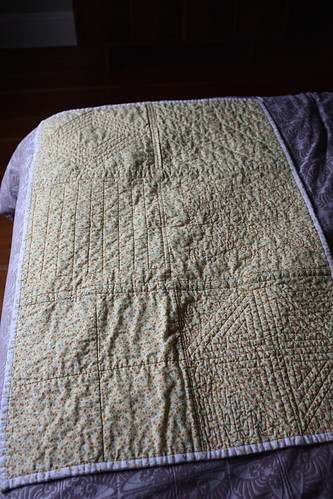 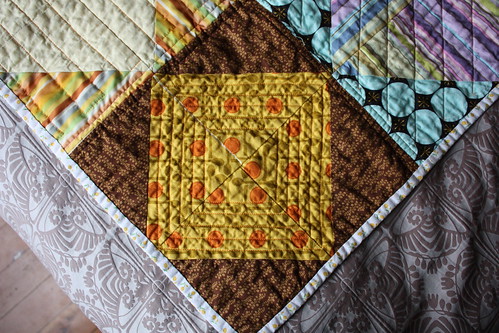 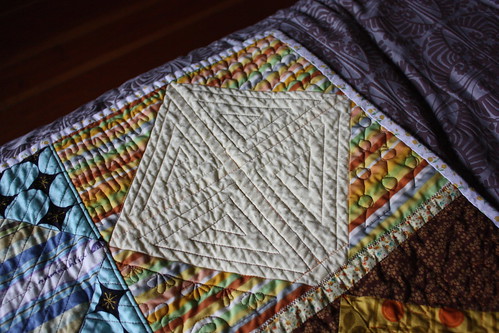 Here are the methods I tried: