We went on two family biking adventures in July. The first was an overnight bike camping trip to Dodge Park with Kidical Mass PDX. I skipped last year's trip to Dodge Park because I still had bad memories of biking on Orient Drive (and getting yelled at by a dude in a sports car) from three years before, but we took a new route this year, which avoided Orient Drive, and I liked it much better (for interested people in the Portland area: take the Springwater Trail to 267th, turn right on Stone Rd, left on Short, right on Dodge Park Blvd., right on Lusted Rd). The only bad part was crossing Highway 26, which had very fast traffic and big trucks, but we just waited for a break in the traffic and crossed in small groups. It was a little scary, but it was over quickly and not as bad as biking uphill on Orient Drive, in my opinion. (While we waited for a break in traffic, I was thinking that if somebody in our group did get hurt or killed making that crossing, the comment section on Oregonlive would have been filled with people asking why we had our kids anywhere near Highway 26. It was definitely not a bike- or pedestrian-friendly crossing, but it seemed like the best choice)

(Note to self: Here's another route to Dodge Park that is supposed to be kid-safe. Maybe next year?)

I think this picture represents family bike camping well: a cargo bike with a potty ring at the helm. (Incidentally, we are finally done with potty training--after 14 months--and Felix is down to just Pull-ups at night, which is great! A very welcome milestone.) 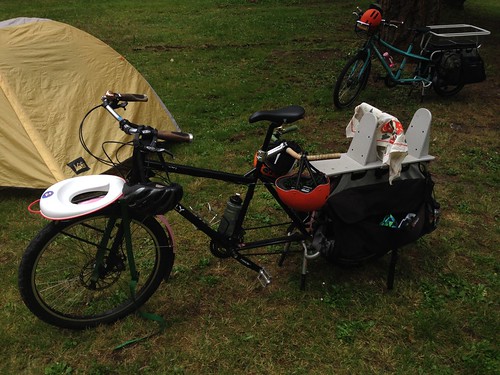 I was undecided about coming along on the trip until the night before, but I'm glad I did. Patrick planned and packed everything, made all of our meals, and carried both boys on his bike. What a guy! After we arrived and ate dinner, we went down to the river (the river on the north side of the park by the playground was our favorite) and caught tadpoles and built little river houses for them. It was nice.

I hadn't been doing much bike riding to prepare for our camping trip, but it wasn't as hard as I remembered. I guess all of those two-kid kindergarten pickups this past year made a difference! Here we are taking a water and snack break on the way home. 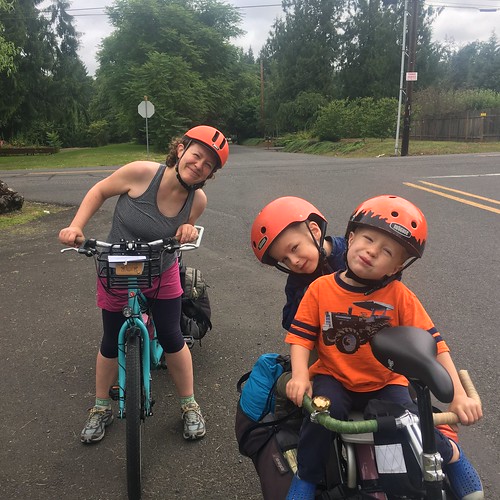 We stopped at Weece's Market in both directions for cold drinks. This was my first time going inside, and I was impressed at the size of the store interior and the extent of the drink selection. But if you're making this trip, don't expect them to let you use the bathroom. They even turned away two adorable little girls in our group who needed to go. 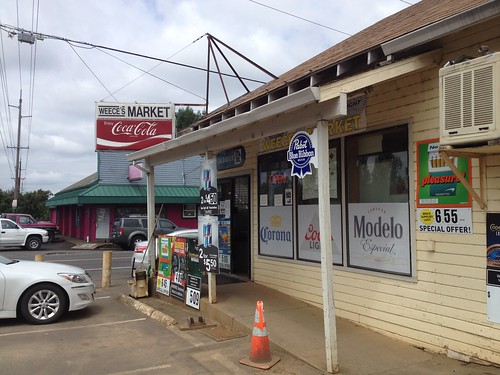 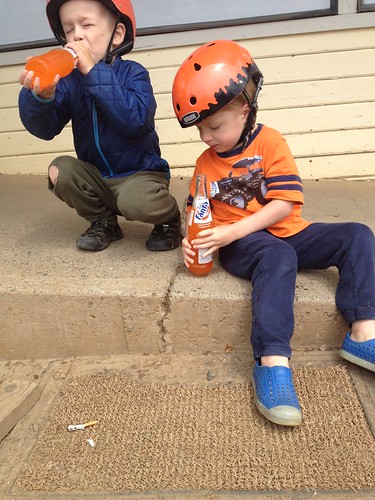 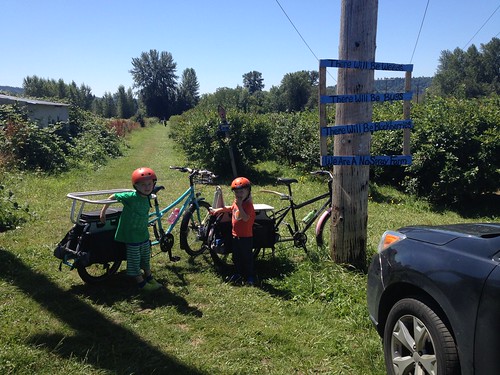 The following weekend, our family again rode on the Springwater, this time to go blueberry picking. Based on a recommendation from some friends, we went to Powder Blueberry Farm in Gresham. The ride was relatively short and 95% pleasant, and the farm itself was great, but the last mile from the Springwater to the farm was not good. On the way there, we took Foster (exited the Springwater at 158th, then left on Foster, left on Jenne, and right on McKinley). Riding on Foster was not fun, but there was a shoulder, so at least we had a little distance from the cars. The last bit up McKinley was very steep, but the road itself was quiet, so it was just a matter of pushing my bike up the hill. 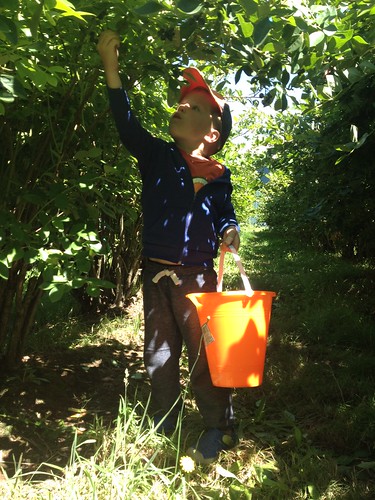 On the way back, we tried taking Jenne Rd. back to the Springwater, since it was downhill and the speed limit was 5mph lower than on Foster. I should have known better, since another member of the PDX Cargo Bike Gang Facebook group warned against it. It turned out that Jenne was even worse than Foster, because it had no shoulder and no passing lane. We stayed as far to the right as we could, but it was bad. We got buzzed by a couple of cars, and one driver honked at us (and then sped past way too closely). It was pretty terrifying. I wish I could have communicated to those drivers that I knew I'd made a bad choice taking that road, and they didn't need to make it worse by making us fear for our lives.

In Portland proper, drivers are usually pretty good around bikes (especially bikes with small children on the back), but I've had bad experiences with drivers in Gresham. So we definitely won't be taking Jenne again. I liked the blueberry farm a lot, but the lack of nearby bike infrastructure makes me hesitant to return. I don't know if there are any better close-in options accessible by bike though; biking to Sauvie Island to pick berries looks scary too. I know, I know--we could just use a ZipCar to go berry picking, but where's the fun in that?

I made a blueberry buckle with some of our berries. It used a full quart of blueberries, and it was tasty! Best on the first and second days though; after that the streusel got a little soggy. 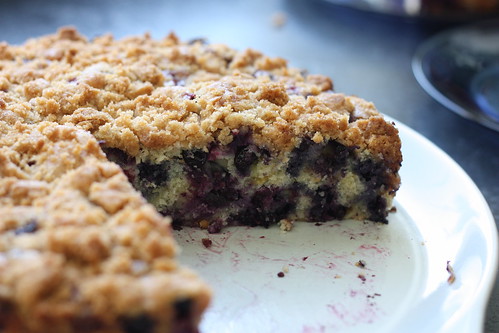