Car-Free Vacation from Portland to Manzanita

Hello again! We're just back from a car-free family trip from Portland to the Oregon coast (Manzanita, by way of Tillamook). I planned this vacation at the last minute, as a way to get the boys out of the house in the two-week gap between school ending and summer camp beginning (also because Felix has been asking to visit the beach, and we didn't go at all last summer).

Since we sold our car last summer, our choices were to either rent a car or take public transportation to the coast. I decided to try taking the Tillamook Wave bus for this trip, to see if it would work for us. It worked out pretty well, and it was about half the price of renting a car (approx. $60 for our family of four, round trip).

We left Portland on Saturday morning, catching the Tillamook Route 5 bus from Union Station. You buy your ticket as you board the bus, and I was worried there wouldn't be enough room for everybody, but it turned out to be only half full. The only downside of this leg of the trip was that we were sitting right behind a woman who reeked of cigarette smoke for the full two hours, and that, in combination with my propensity for motion sickness, left me feeling a little queasy by the time we got to Tillamook. On the bright side, both boys remained happily occupied by video games (Felix was very into Toca Nature this weekend) for the entire trip, and since we weren't driving, it was easy for us to jump in if they needed help or wanted to show us something. 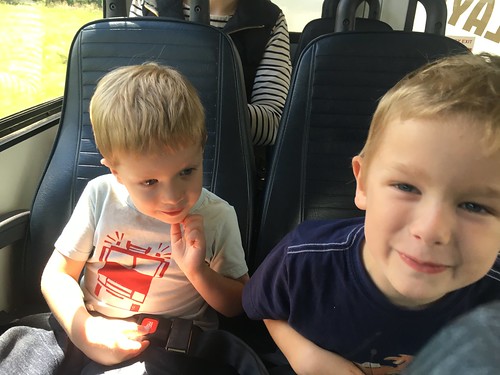 After arriving at the Tillamook Transit Center, we had a late lunch at the Pelican Pub and then hustled back to the Transit Center to catch the Town Loop (Route 1) bus, which only runs once an hour (so the stakes to catch the bus are a little higher than in Portland, where buses run every 15 minutes). If we'd had more time, I would have loved to walk around the Saturday farmers' market, which was set up in the Transit Center parking lot.

Our destination was the Tillamook Cheese Factory, which is pretty close to the Transit Center. I thought about walking there, but (1) Felix gets complainy if he has to walk more than a few blocks and (2) we would have had to walk on the shoulder of a 45mph highway at the end of the route. Because of that, I opted to take the bus instead. It was a roundabout 20-minute ride, but we got to see some cows out the window, and it was fun seeing different parts of town.

The main part of the factory wasn't operating when we visited, which was a bummer, but we still got to see a person shrink-wrapping big blocks of cheese, and we ate ice cream and sampled cheese cubes. Oh, and the boys drove the pretend VW bus in the lobby. Next time we should visit on a weekday so we can see the factory in its full glory, like we did two years ago. Two years between cheese factory visits seems like the right amount of time. It's a fun place to visit, but there's not a lot to do there. 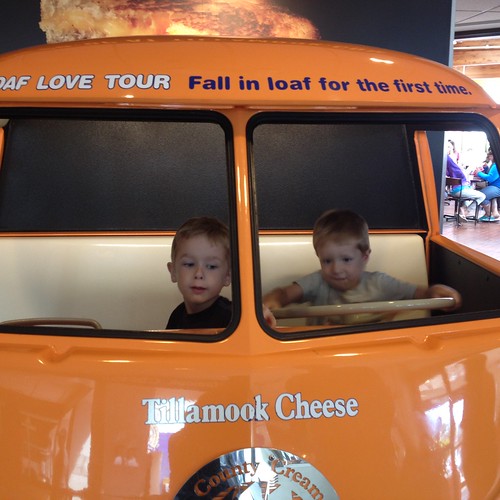 Because the bus to Manzanita doesn't run very frequently from Tillamook, and because I didn't want to overload the boys on bus trips in one day, we ended up spending the night in Tillamook, at the Shilo Inn near the cheese factory. Because of that stretch of road where there are no sidewalks, we took the Route 1 bus less than a mile to get to the hotel, which felt silly, but at least we didn't have to wait long for the bus, and it didn't cost us extra money, since the fare for the town loop bus is good all day long.

The big selling point of the Shilo Inn was that it had a swimming pool, and the boys were pretty excited about that (and even more excited about the adjoining hot tub!). However, being cooped up in the room before and after swimming wasn't great. I had hoped the novelty of watching TV would be enough to keep them happy (we don't have a TV at home; just Netflix), but the channel selection was limited, and most of the options weren't kid-appropriate (best bets: Golden Girls and an infomercial for a dance-based weight-loss program). If they'd had the Food Network, things probably would have been okay, but instead, the boys lost interest and fought, and it was like being back at home, except that we couldn't send them to different rooms. Ack! If we do this again, I would skip the Tillamook side excursion and head straight to Manzanita.

The next morning, we walked across the street to Fred Meyer and caught the Route 3 bus to Manzanita--a 50-minute ride for $3 per adult, with some nice views of the bay and ocean. Thumbs up! 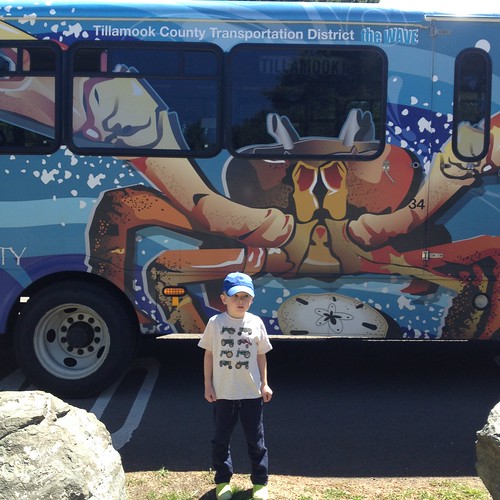 We arrived in Manzanita around 11:30, picked up sandwiches at Bread and Ocean, had a windy beach picnic (sandy sandwiches!), and then hung out at the beach and explored downtown until it was time to check into our rental house. I chose this house because of its proximity to the beach, bunk beds, beach toy stash, and because it was only two blocks outside the tsunami safe zone (those earthquake preparedness articles I read last year really made an impression!). An additional bonus: the TV had tons of channels, and Arlo (and I) remained happily occupied watching hours of Kids Baking Championship when he wasn't at the beach. 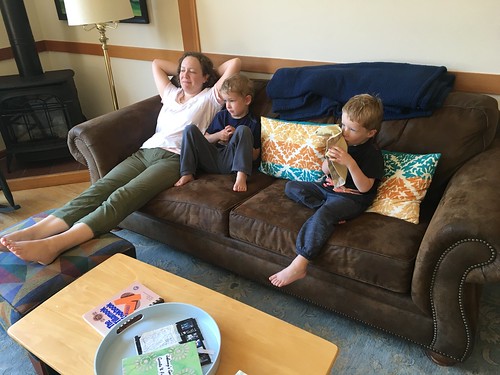 We stayed in Manzanita for two nights, had some good beach visits, and made good use of the big downstairs bathtub in the house for cleaning off sandy kids. I was especially glad that Patrick was willing to take the boys to the beach and clean them off repeatedly, since I was more interested in spending a few hours outside and then relaxing at the rental house. Felix, especially, seemed to enjoy himself a lot. He and Arlo found a little creek on the beach and spent hours digging muck out of it. My favorite part was that on Monday morning, I got to lie on a beach towel and read a book in the sun while the boys entertained themselves. Living the dream! 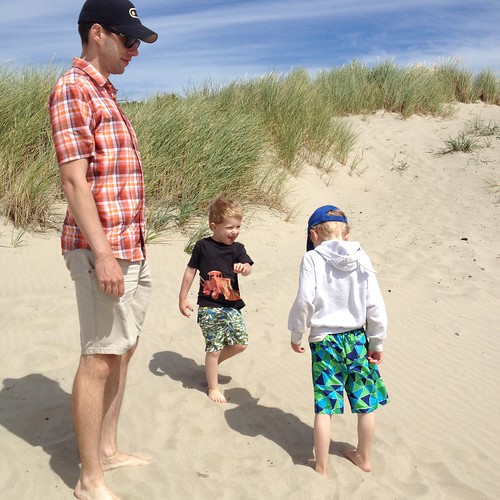 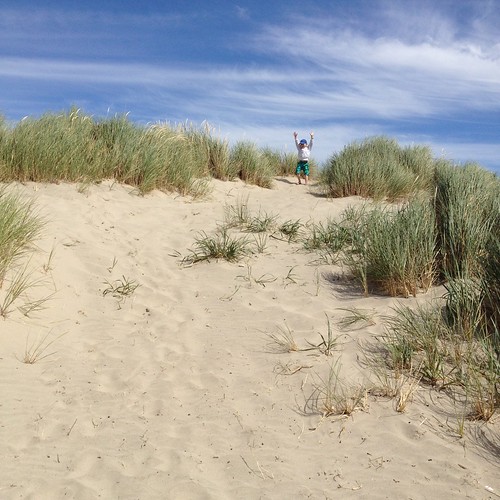 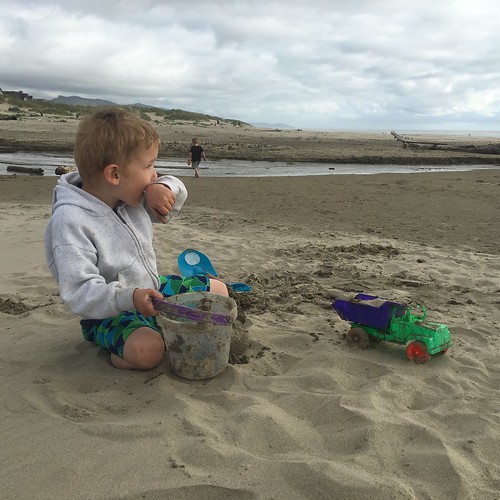 It was a good beach vacation. The boys still had their moments of strife, but it was a nice break from our normal routine.

This morning, we caught the Route 3 bus back to Tillamook. We had two hours between arriving in Tillamook and catching the bus back to Portland. I was worried we'd have nothing to do, but things actually worked out really well--we had lunch at the Dutch Mill (a car-themed burger restaurant--Arlo was psyched!), and then we explored the Pioneer Museum, which was across the street from the bus station. I wasn't expecting much, but it turned out to be pretty cool, especially the upstairs room full of taxidermied animals, big and small. Definitely worth the $4 admission fee (for adults; kids are free). 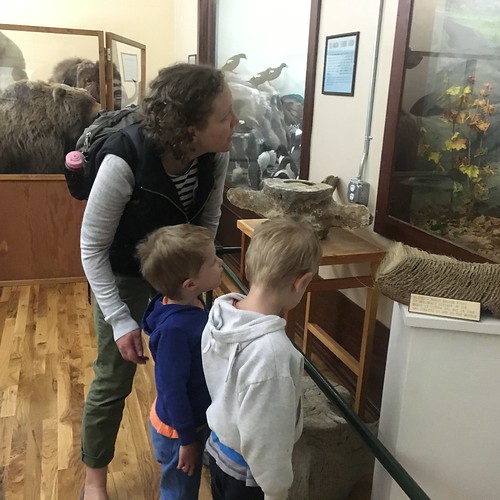 The bus ride back to Portland took longer than expected due to some traffic outside of Portland, but it wasn't a big deal for us, since we had nowhere to be. And the driver was very nice, which I always appreciate.

I think next time, we might choose to rent a car, so that our travel days aren't so long and so we can make our own schedule (and not have to spend the night in Tillamook just to visit the cheese factory). However, I was pleasantly surprised at how well this trip worked out. The buses were all on time, and they were never too crowded. The bus was affordable, and we were able to give the boys more attention during the ride, avoiding the unpleasant sibling fights that would probably erupt in the back seat of a car (based on previous road trips when the boys were younger).

P.S. To answer a few questions that I had while planning the trip: (1) There's no bathroom on the Wave bus from Portland to Tillamook, but it seems like it's common practice for passengers to take a quick bathroom break in Banks. If you ask the driver, he'll drop you off across the street from Sunset Park, and you can run and use the park restroom while the driver goes to the Banks stop. Then he'll pick you up on his way back out of town. (2) The bus can carry two bikes on the front rack, and we also saw a passenger take his bike inside the bus and store it in the (unoccupied) handicapped seating area when the bus was pretty empty. I don't think you could take cargo bikes on the bus though, which is too bad, since it drops off very near the Banks-Vernonia trailhead, which would be perfect for a bike camping trip to Stub Stewart. This seems like a great option for people camping with normal bikes.