It feels strange writing a post about what I've been up to when the news this week has been so sad. I haven't known what to say. I saw this on Twitter (from @spiritandhaven, modified slightly), and it feels appropriate: "LGBT+ friends: you have my heart, my support, my affirmation, my vote, my voice, my empathy, my love. I am by your side." Sending love out into the world...

Back in April, I took my first solo vacation since Arlo was born, to visit my dad and his ladyfriend, Hope, in Boulder. The original impetus was to see Devotchka's production of Sweeney Todd in Denver (which turned out to be excellent), but I also got to spend some quality time with my dad and Hope and eat good food in Boulder (brunch at Tangerine--thumbs up!). I'm very glad I was able to make the trip.

When I came back from my trip, this sign was on the door to the boys' room ("To mama only: Do not enter. This is a me and Felix area"). When I asked why I couldn't come in their room, Arlo said he was planning on putting up some "inappropriate signs" and wouldn't elaborate further. Subsequently, Felix showed me the signs that Arlo made: ten post-it notes reading "horse butt" in rainbow colors. Horse butt! 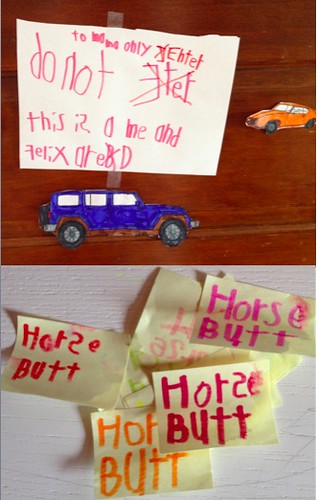 In early May, Felix turned four and had his first birthday party with friends invited (he didn't really have friends in previous years, since he hadn't started preschool yet). His aversion to cream cheese remains for the moment, so he requested yellow cake with chocolate frosting for his birthday. He's still working on producing enough air to blow out candles, so I ended up helping him out. 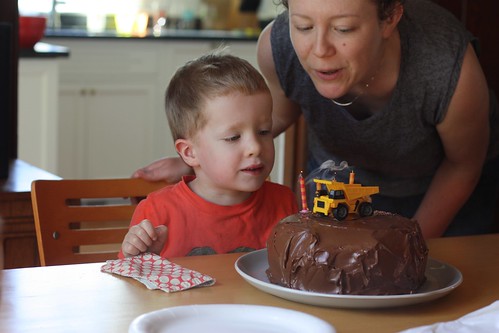 I can see the light at the end of the potty training tunnel with Felix (knock on wood). He's almost there, and he's very proud of the progress that he's made (I am too!).

It's still very hard to get either child to sit nicely for a picture, especially when they're together. Here's the best Mother's Day picture we could get this year. My mom and Alan were visiting that weekend, so we were able to get all four of us in the picture. 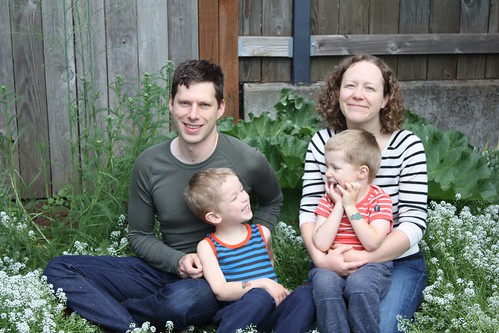 In mid-May, Arlo finished Little League, which was a relief, since he didn't seem to be enjoying it. Once he was at the game, it was fine; he just hated having to stop what he was doing at home to go play baseball (same deal with going to school, actually). I'm glad Arlo was willing to try something new (and I'm also glad that his baseball-loving Grandpa Rick was able to come visit and watch Arlo play). 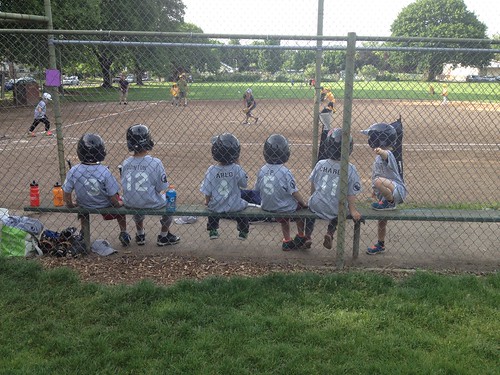 At the end of May, Arlo turned six (!), and he invited six friends over for his birthday party. I was feeling a little under the weather at the time, so he had birthday donuts, with our traditional banana cake with cream cheese frosting (this time in pink) coming a few days later. 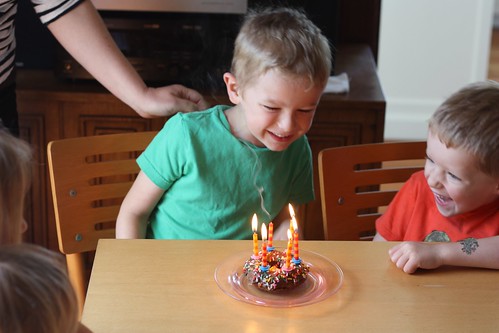 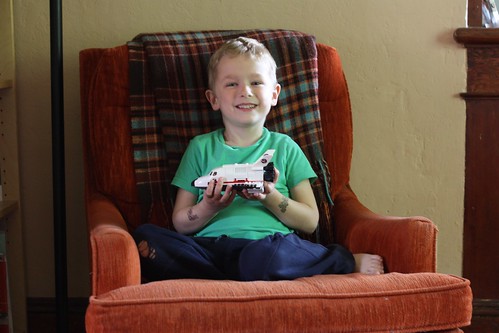 We've been trying to get Arlo to stop sucking his thumb for a while now. During school drop-off, Patrick learned that when one of Arlo's classmates turned six, he turned in his blankie in exchange for a $35 shopping spree at the toy store. When we mentioned this to Arlo, he seemed game, so we put good old Squirrel Blankie away, and Arlo got to take a big shopping trip to Finnegan's. He came home with four toy vehicles, of course. It seems like he has stopped sucking his thumb now that Blankie is out of the picture, which is great (he was only doing it in bed at this point).

The boys got some cool Lego sets for their birthdays. The most complex was the Lego Ghostbuster car, which Arlo built in one day with only a little help from grown-ups. He was very proud of his work--so proud that he wrote about it in his kindergarten assignment the next day ("I can build a 521-piece Lego kit all in one day!"--though he would want me to tell you that it's actually 508 pieces; he remembered the number incorrectly at school). 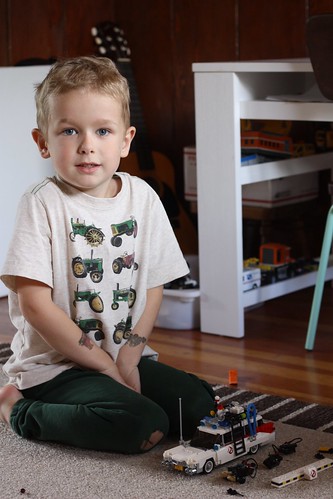 A few weeks ago, Patrick took both boys bike camping (separately). He took Arlo to Stargazer Farm (near Dodge Park) over Memorial Day weekend as part of the Swift Bike Camp. The following weekend, he took Felix up to Seattle (via Bolt Bus) for a family bike camping event with our friend Jon (more here, from the ever impressive Madi of Family Ride). Here's a picture of Arlo smiling a genuine smile--quite a rare thing at the moment (I mean, he smiles real smiles; he just doesn't usually do it when somebody's taking a picture of him). 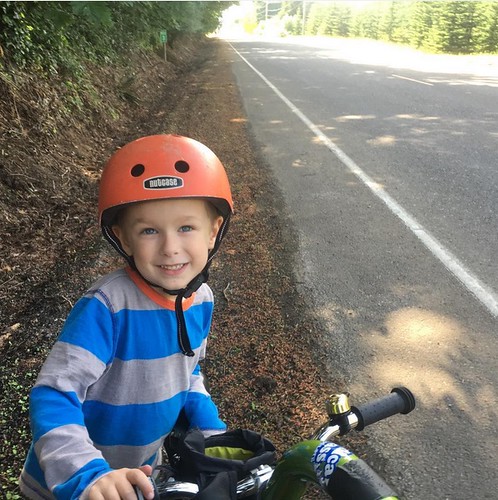 Following a spring cold, Felix had been having trouble hearing us for over a month (though it's sometimes hard to tell if he really didn't hear us or is just messing with us). Arlo has the same issue after getting a cold, but it usually clears up a little faster. Patrick took Felix to the pediatrician earlier this week, and it looks like there's fluid in his ears, so he wasn't just pretending to be hard of hearing. The doctor told us to give him Flonase for the next month, to see if that helps, and if not, he may need ear tubes. I made the mistake of searching online for more information, which made me a little nervous, but I talked with the mother of one of Arlo's classmates, and she said it was no big deal when her son had ear tubes.

The school year ended for both boys a week ago, and the first few days with both of them home were pretty bad. Lots of squabbling and whining "I'm bored!" This prompted me to make a summer calendar detailing exactly what we're going to do each day. I've found that getting them out of the house makes the day easier (keeping them apart from each other is even better, but that's not an option during the week).

Week 1 of my summer plan included Arlo cooking brunch (with assistance), a trip to the grocery store to buy junk cereal (a new end-of-school tradition, borrowed from Twitter), a library visit, a trip to the Belmont fire museum, a picnic, and a playdate with a kindergarten friend. Tomorrow: bowling and ice cream! I'm glad they'll be starting summer "camp" (modified Montessori lessons at Felix's preschool) three mornings a week in July, because I don't think I could keep up this pace all summer.

In other news, nearly 20 years after the fact, I have finally gotten around to reading Harry Potter. I was a little too old to be interested in the series when it first came out, but I was curious about whether Arlo was ready for it (Answer: No, he's not. The first page of the first book was too spooky for him, and he refused to listen to any more). Arlo wasn't interested, but us grown-ups decided to give it a try. We just finished all of the books, and we're nearly done with the movies. I'm kind of glad that I waited until the series was finished so I didn't have to wait a year between books. And now I'm ready to appreciate all of the Harry Potter references that I come across in my day-to-day activities!

I haven't posted about my knitting recently, in part because I haven't been knitting much with the warmer weather. So far this year, I've knit a couple hats (you can see them all on Ravelry, if you're interested). I joined my friend Lee's leethal VIP club, and I had fun knitting the first two hats: Provocateur and Omnia. The third hat for this year was just released, and I'm hoping to start it this weekend. Lee comes up with such creative designs! 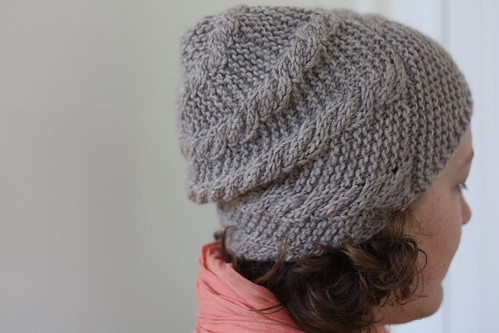 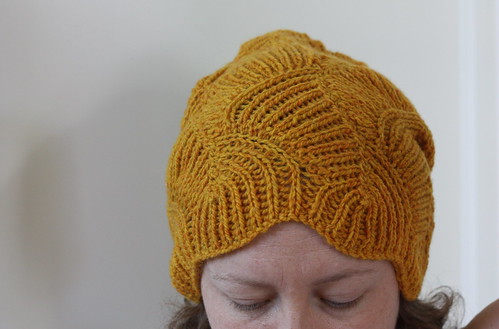 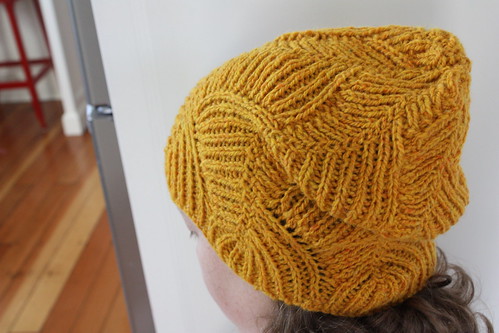