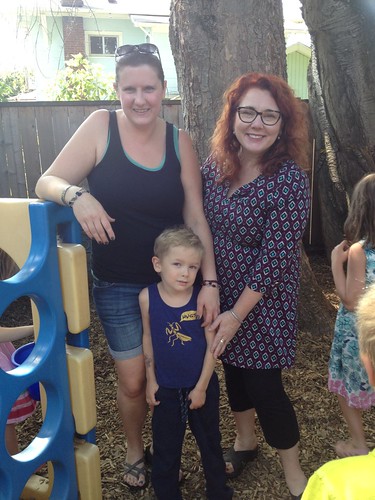 Arlo finished preschool in mid-August, much to his chagrin. Right up until the week before kindergarten started, he was adamantly against starting at a new school. Luckily, he got to meet his new teacher and visit his classroom the week before school started, which helped change his mind about kindergarten. We also had one of his future classmates (and family) over for dinner before school started, so that Arlo would have a friend in his class. 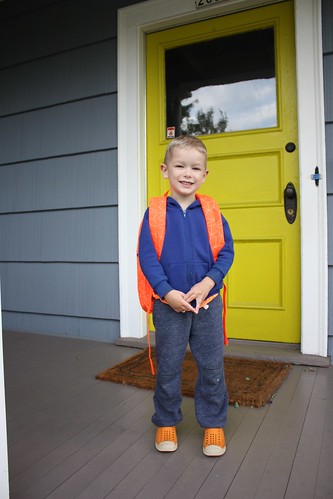 When Arlo went to preschool, he would complain almost every morning about having to go to school. This stopped (temporarily) once Felix started going too, then they both started complaining about going to preschool (totally unfounded--Felix tells me every time I pick him up that he loves preschool!). But Arlo has done very little complaining about going to kindergarten so far, which is a good sign. He has definitely bonded with his teacher, and he gives her hugs every day at pickup. It sounds like he spends much of recess following her around and trying to engage her and another kindergarten teacher in conversation, but he's happy and learning new things, so I'm very pleased with how things are going.

They make a lot of art in kindergarten, and it's fun to see what Arlo is capable of making. We don't do a lot of kid arts and crafts at home, and at preschool he only did a little half-hearted marker scribbling every so often, so I've loved seeing what he's making in kindergarten. Here are two early self portraits, on display at the open house in September. That second one is creepy, but I love it! 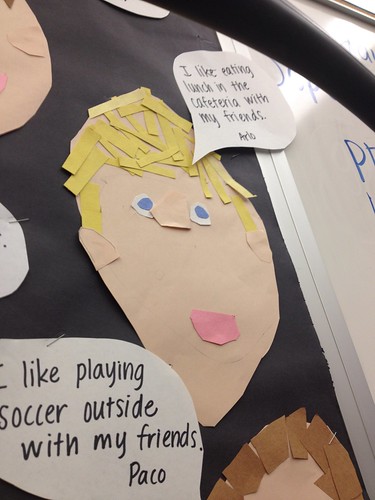 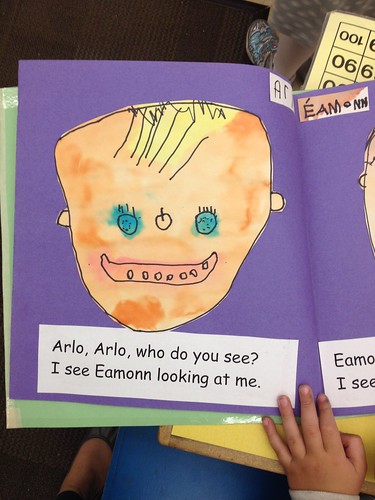 Arlo's switch to a new school has necessitated new drop-off and pick-up routines. Typically, I take Felix to preschool (three mornings a week), and Patrick takes Arlo to kindergarten (both by bike), then I'll walk to pick up Felix at lunchtime. Then Felix and I take the cargo bike to pick up Arlo in the afternoon. It took a few weeks and some conferring with other bike parents to find a good route from home to elementary school, but we have things sorted out now. 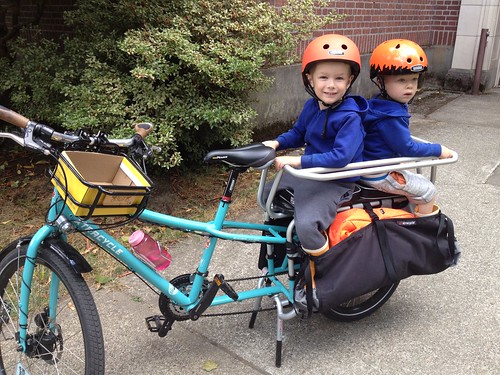 Felix had been in the Yepp Maxi seat on the back of my Edgerunner until the end of the summer, but since I didn't feel very confident with both boys on the bike in that configuration, I decided it was time for Felix to graduate to sitting on the bike deck, to make school pickup easier (he's almost 3.5 years old). He is doing great on the deck, and the bike feels much more stable now that he's not in the seat. Hooray! 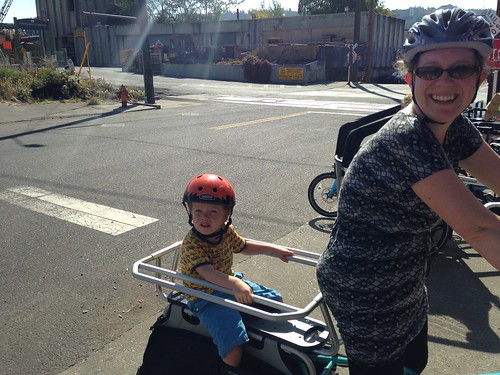 In mid-September, Portland's new pedestrian, bike, and transit bridge, Tilikum Crossing, opened, as did the new MAX Orange Line. Patrick took both boys to opening day, and Arlo rode across the bridge himself. Arlo also rides his bike on the street alongside Patrick from time to time. It makes me a little nervous to have him in the street, even though it's only on quieter streets, but so far he's been fine. Some of his kindergarten classmates also bike to school with their parents, which makes me feel better.

I'm loving the new MAX line being close to our house. I've taken both boys on public transit adventures across the new bridge on the MAX and streetcar. What a fun way to get downtown!

At the end of September, I went on a new-clothes-buying jag, spurred in part by the change in seasons, but also (I think) by my jump up to a new age bracket--35 to 44. I don't know why, but now that I'm 35, I'm feeling like it's time to cut back on the whimsical, cute clothes, and switch to more basic, conservative items. Sounds boring, but I'm liking it so far. It could also have to do with the fact that it had been five years since my last big wardrobe switch-up, and many of my dresses were getting threadbare and stretched out. Time for something new!

My new approach to fashion is based on what the Internet is telling me is fashionable these days--a capsule wardrobe. I've been focusing on lots of neutrals and stripes. I bought some items at our local consignment shop, Crossroads, and I've ordered some things from J. Crew. I also tried buying a couple pieces on eBay, but I've had bad luck with getting things to fit right when I order from eBay, and there are no returns. The price may be right, but it's not worth it if it doesn't fit! 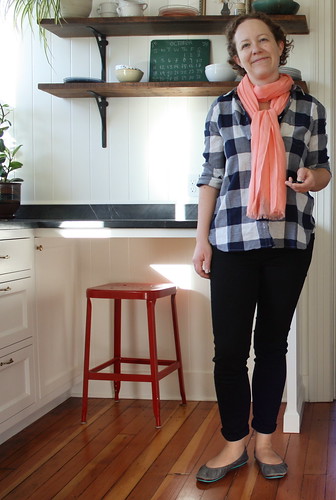 For the past five years, I've tried to wear dresses when possible, which was nice, but I'm happy to be wearing jeans more often. I bought a pair of J. Crew Lookout jeans, which are high-waisted skinny jeans. I'd been avoiding skinny jeans because of the name, but it turns out they're flattering and comfortable, even on my not-particularly-skinny self. What a nice surprise!

I also bought this new necklace from Layered and Long on Etsy. I spent a lot of time deliberating over which length to buy--this is the 17 inch length, which falls right along the collarbone. I wear it most days--I like having a little smile around my neck :) 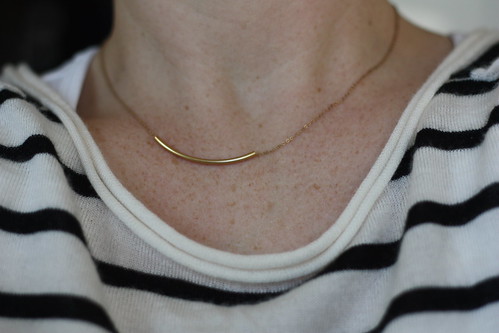