Inside Our Kitchen Walls

And here's the corner where our sink used to be. I like the contrast between the plaster lath at the top (stairs to second floor) and the tongue and groove board below (basement stairwell). 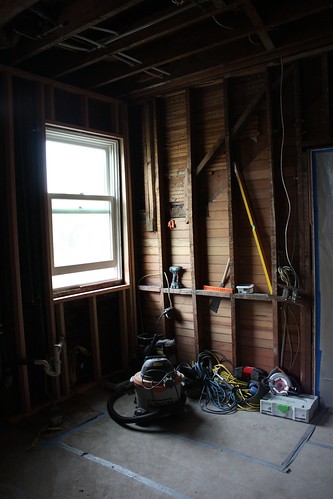 We've got a makeshift kitchen set up in our dining room, fridge on the left, (non-working) stove on the right, pantry items on our bookshelves, and non-breakable dishes on every other open surface. We use the laundry sink in our basement to wash dishes (Patrick had the great idea to buy a bus tub at our restaurant supply store; it has made dishwashing much easier). 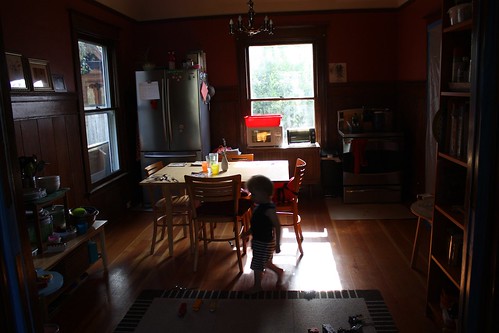 It's working well enough, except that the boys can reach most of our dishes/utensils/food, which leads to "games" like this: 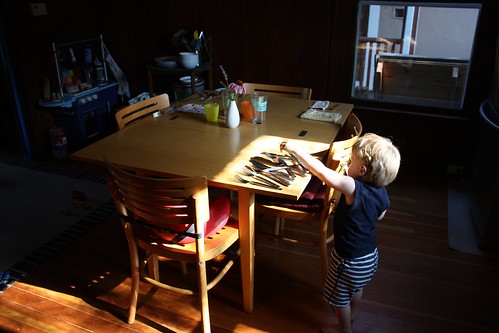 It's also no fun to make dinner at the table while Felix tries to grab everything. Luckily, Patrick has been able to come home relatively early most days, so he can keep the boys occupied. We've been eating lots of salads and bread and having takeout pretty regularly. We've got a couple options for heating food available to us, but since we've had a heat wave for the past two weeks, we've done very little cooking so far. Our original plan was to grill in the backyard a lot, but it's full of wood scraps, porch pieces, a ladder going up to the roof, and our toilet (classy!), so it's not the best place to have kids playing while I'm cooking.

When I last wrote, we were in the middle of deconstruction, which took three days. I had a little meltdown at the end of Day 3--it was hot, we couldn't access the stuff in our basement (it was covered in plastic sheeting for the chimney takedown), some of our trim cracked when it was taken down, and things just felt out of control. The deconstruction crew was great; it was just an overwhelming experience.

Things improved after deconstruction wrapped up. Every day, we see little improvements in our kitchen. We have had to make some adjustments to the design already, due to lost space from furring out the south wall, choosing to have inset cabinet doors, and making the new hallway wider to accommodate trim. It's a good exercise in being flexible--something I'm not always good at. It's also a good test of my patience--I'd love to have people working on the kitchen 8 hours a day, every weekday, but that's not how it is. We have to wait until each contractor is available. I guess that's why the remodel is scheduled to take another 8 weeks.

Following deconstruction last week, Carpenter Mike framed out the new hallway (in the middle of the photo above), cut our new door hole, patched our old door hole (now a window hole), and strengthened the existing framing where needed. Brandon from Liberty Plumbing did his thing at the start of this week, which included more work than expected, as our stack was venting into an empty space next to the attic instead of going outside. The big question of the week is whether the cute little pedestal sink we had picked out for the bathroom will actually allow the new bathroom door to open while still giving the clearance between the sink and toilet required by the code (darn code! They didn't have to worry about that in 1906). It's going to be tight.

The electrician and HVAC guy are scheduled for tomorrow, which hopefully means our dryer will be hooked up again soon (the dryer vent had to be removed from the exterior wall last week, because it came out right under our new door hole). And next week, hopefully we'll be starting drywall and cabinets. That'll be exciting!